As someone who eats a plant-based diet, I consume a fair amount of veggie burgers. Sometimes by choice, sometimes because it is literally the only option. Further complicating matters is the fact that many veggie burgers are not vegan–they contain cheese or eggs–so your options are really quite constrained. This means that when I find a vegan veggie burger patty I like, I tend to stick with it.

For reference–I tend to like veggie burgers that somewhat resemble beef burgers in texture–I don’t like finding a lentil or corn kernel in the middle of the patty. This is not to say I don’t love lentils or corn; it’s just not what I’m looking for in a burger. And while I recognize that burgers made of whole foods (as opposed to “textured wheat protein”, for example) are likely better for me, health is really not my primary burger concern. That’s why I love the Gardein Ultimate Beefless Burger. I have them on standing order from SPUD, and I’d estimate I eat them at home at least once every two weeks. And I tend to talk about how much I love them a fair amount in the office, apparently, because when the new Field Roast Handformed Burgers arrived at SPUD, it was decided I should conduct a taste-test to determine which veggie burger is truly the best. I know, my job is really tough.

In addition to the Gardein and Field Roast burgers, I also sampled Sol Cuisine’s Spicy Balck Bean Burger on the recommendation of a co-worker, and the Yves’ The Good Veggie Burger. All burgers were prepared and served the same way–fried on the stove and served on a toasted white sesame seed bun with ketchup, mustard, pickles, and onions. 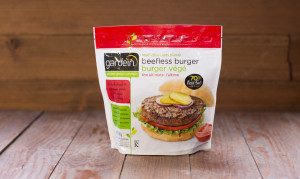 My old standby. These are (from what I can recall about actual beef) the most similar to real meat in texture and taste of any veggie burger I’ve ever had in my life, which could be off-putting to some. These are definitely not gourmet burgers–they are kind of on the thin side, more similar to a fast food burger, or (and this is a very specific reference that no one I’ve explained it to has understood) the kind of pre-made, house-brand burger patties you can buy at a chain grocery store. They are predominately made of soy and wheat, so they are not gluten-free, and the ingredient list contains very few familiar items, but I still love them. 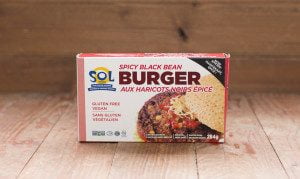 These burgers are made of more identifiable foods (black beans) than any other burger I sampled. As I mentioned, these are not typically my preferred style of veggie burger, but I will say that these did have a really good Tex-Mex flavour. My coworker who recommended them suggested frying them until they got a crispy shell on the outside, which I did, but the interior texture was still quite mushy. Overall, I didn’t dislike them, but I wouldn’t order them again. However, people who prefer a less meat-like, less processed burger would probably love them. They have a shorter, more recognizable ingredient list than any other type sampled. 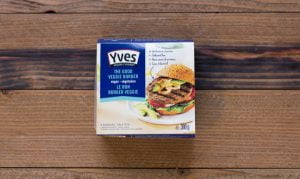 Yves is probably the most widely available and popular veggie ‘meat’ company of the four. Chances are, if you’ve had a veggie burger at a company barbecue or a similar event, it was Yves. Honestly, they’re not bad. These burgers also had a somewhat meat-like texture, but their flavour was much blander than other burgers I tried. They also have the longest, least comprehensible ingredient list, including that warning that although they are vegan, they are not suitable for people who have dairy or egg allergies. They are also not gluten-free, if that is a concern for you. All in all, these are fine, but for this style veggie burger, I’d take the Gardein over them any day. 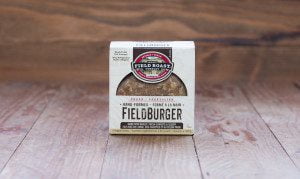 These burgers were hands down my favourite. Given my maniacal love for the Field Roast sausages, I was not at all surprised. These burgers are thicker and juicier than the Gardein, and despite the fact that you can identify whole foods (carrots!)  in the burger patty, the texture was uniform and beefy. The flavour is not as ‘beefy’ as the Gardein, but it is delicious–complex, meaty, and umami-ish. They taste more like real food in their own right than something pretending to be beef. The main drawback of these burgers is that they have more than twice the calories of any other (340 vs 120-130), and waaaaay more fat, but again it’s not like we’re eating burgers as a health food, right? Trust me, they’re worth it.

Have you tried all these? Tell me what you think. What’s your favourite?