WHY YOU SHOULD TRY THE ZMOOTHIE

My introduction to the zmoothie was out of desperation.

Over the summer, I got a little heavy handed with the zucchini at the market, because I love them, and they’re delicious. But then I couldn’t find enough ways to prepare them and found myself throwing them into the freezer. I now have enough frozen zucchini to last me well into the winter. But it’s frozen. And that’s less fun. And also there is no more room in my freezer.

I heard through a co-worker that apparently zucchini is good when used as a smoothie base.  (What, your office doesn’t have a daily smoothie discussion? You should definitely start one for useful tips like this). I was hesitant as I wrongly assumed that would be weird and gross. Even so, I have a serious overstock of zucchini, so I gave the zmoothie a try.

After my workout, I used about a 4 inch piece of quartered zucchini along with vanilla protein, mango chunks, 1/2 a kiwi, almond milk, a bit of kale, chia seeds, and garnished with shredded coconut. I loved it! The zucchini gave it a great creamy texture. Because of its relativity mild taste, it serves as a great base, just like the rumor I had heard. It’s a very hydrating smoothie because zucchini contains a lot of water, which is perfect post-workout. I also noticed that this smoothie, whether it was from the zucchini or not, was also very filling! So you’ve added nutrition, thickness, and hydration to your zmoothie with little to no added taste or calories.

Next time I use zucchini in my smoothie, I’m going to add a banana, chocolate protein powder, and peanut butter so it will curb all my peanut butter cup cravings! (it really works) 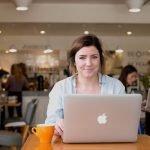 Becca is a Graphic Designer at SPUD. She enjoys coffee and speaks in English accents sometimes.