This season is rich with traditions, especially in the culinary world, varying from culture to culture. Whether observing Christmas, Hanukkah, Kwanzaa, heck, even Festivus, there are certain foods synonymous with each celebration. Putting a modern and healthful twist on a traditional favourite, one of SPUD Victoria’s ambassadors, Ellie Shortt, brings us her take on latkes, a food traditionally eaten by Jewish revelers during Hanukkah. 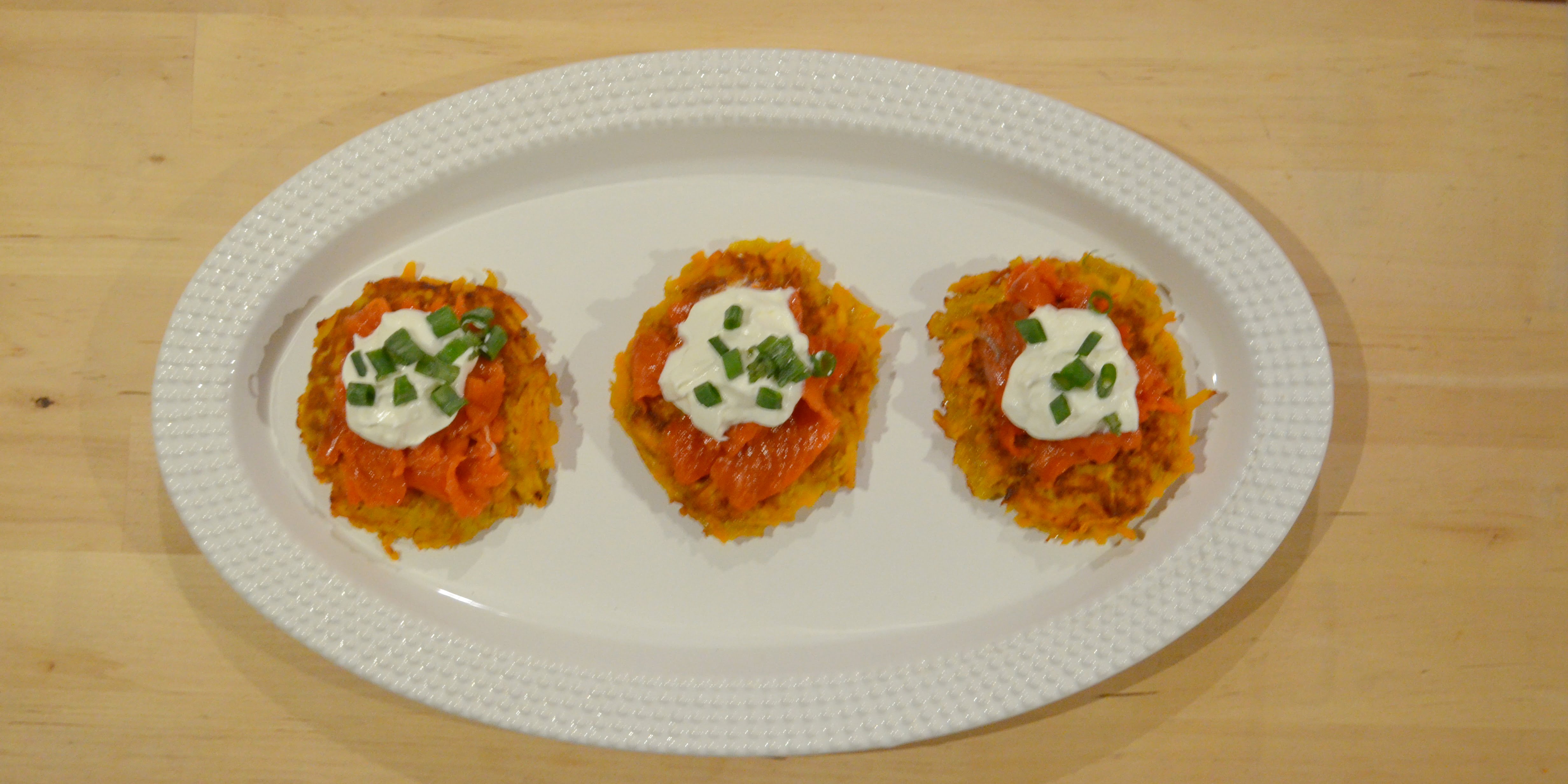 Among the plentiful shortbread and candy-canes of holiday snacking, lies a somewhat heartier and more satiating seasonal treat of Jewish origin. Traditionally made from potatoes, latkes are fried in oil signifying the miracle of Hanukkah, which occurred when a very small group of underdog soldiers triumphed against a massive army of their oppressors and subsequently reclaimed their holy temple. When relighting the temple’s menorah, there was only enough oil for one day, yet wondrously it burned for eight days straight, ergo the reasoning behind the familiar eight days of presents, and an indulgence in oilier cuisine at this time of year. But contrary to popular belief, oily doesn’t have to be unhealthy. In fact, the right kinds of oils and fats can be extremely nourishing!

So how do you make latkes good for you? Well first, you can sub the usual vegetable oil for coconut oil. Unlike many other oils, coconut oil maintains its integrity under heat and therefore doesn’t rancidify or break down as easily, which can bring about a myriad of scary health concerns. Next, switch the potato for yam, which doesn’t cause your blood sugar to spike as high, and contains a vast array of beneficial vitamins. I also like to top my yam latkes with Greek yoghurt and smoked salmon for some added protein. This makes for a great appy or side dish, even if you don’t celebrate Hanukkah, and a sure-fire crowd-pleaser at any party during the holiday season or year-round.

*Note: you can sub any herbs or spices in for the cinnamon and ginger. Try rosemary and dill, or curry powder and paprika for a little something different!

In a medium sized mixing bowl, beat the eggs with the coconut flour, cinnamon, ground ginger, and sea salt.
Mix in the shredded sweet potatoes until they are well combined.
Melt the coconut oil in the pan on medium-low heat until it spreads out evenly 1/8 of an inch deep.
Spoon the yam mixture into the pan in “cakes” that are about 4-6 inches in diameter, and cook approximately 2-3 minutes per side until they hold together, flipping once as you would a regular pancake (you’ll know they’re ready when they are golden brown and slightly crispy on the edges).
Top with Greek yoghurt, smoked salmon and chopped spring onions. You can also opt for the more traditional choice of applesauce and sour cream, or any garnish of your choosing for a great appetizer, snack or side dish!