The sea and food are teaming up for Earth Day.

Ocean Ambassadors Canada and SPUD have partnered as the food delivery service is re-launching its Takeback program, paused at the beginning of the pandemic. The Takeback program sees customers returning certain Be Fresh or Nature’s Path soft packaging to SPUD to reuse and recycle itself. Between April 19 and 30, for every one of these products purchased, SPUD is donating 50 cents to the local non-profit Ocean Ambassadors Canada.

The launch coincides with the 51st annual Earth Day, April 22.

Rather than using scary images of dead turtles and fearful proclamations that ‘we’re doomed, we better do something,’ Ocean Ambassadors Canada looks to inspire. “Our mission is to connect people with the ocean, educate them about marine pollution, and then inspire them to take action,” said co-founder Alison Wood. “It’s reconnecting people with nature, using the ocean, and then they’ll naturally want to care for it.”

Pre-COVID, the non-profit would come to Bowen Island Community School every year as part of its school field trip program. Kids learn about microplastics and plastics in the food chain as well as splash around on stand up paddle boards on the ocean, hopefully learning to love the beach and the ocean. The young students are also encouraged to think of how they could be ambassadors for the ocean.

“It’s one of our things ­– to really encourage that creativity,” said Wood. “The whole idea of solving the climate crisis being, it is going to be that generation’s big ideas that are going to make the difference, I believe.” 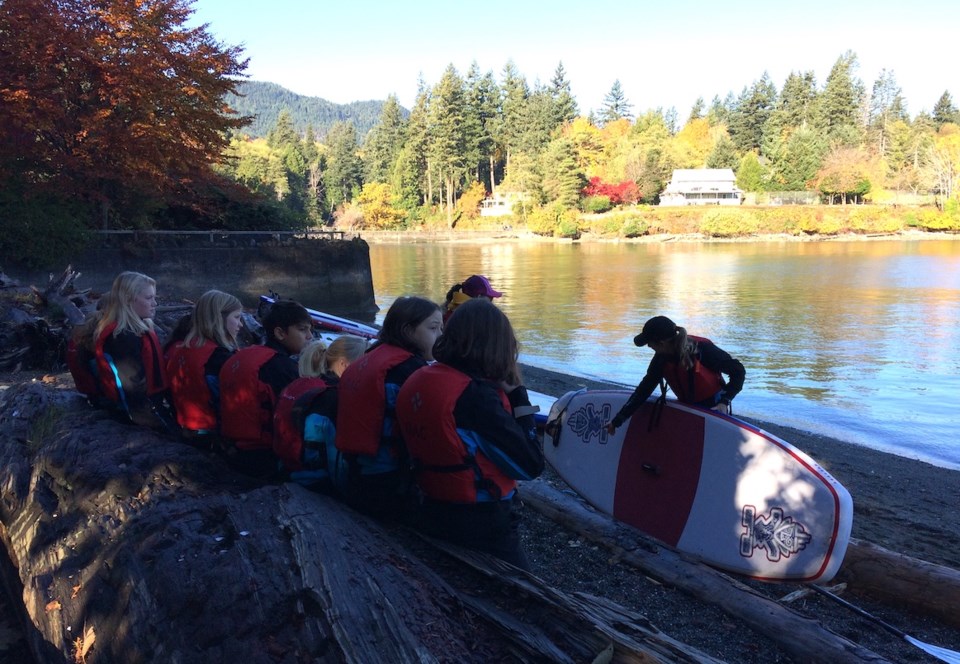 The organization also does kids camps and community initiatives – like getting many of the businesses in Horseshoe Bay to move away from plastic carry bags a couple of years back – but since the pandemic began has pivoted to do some zero-waste coaching for small businesses.

The organization goes into businesses, particularly ones that have single-use takeout items, and make suggestions about what might be more sustainable.

For example, compostable single-use items are not as sustainable as regular clear plastic that can be recycled, said Wood.

“[Businesses] are paying more for their compostable takeout containers thinking that they’re doing the right thing,” she said. Compostable containers aren’t accepted in recycling streams but if they get in there, they contaminate the plastic as it’s melted down and the plastic is lower grade. The containers also can’t be composted in backyard composts but rather need to go into industrial composting facilities with specific temperature, light and tillage, said Wood. “It’s kind of greenwashing,” she said. “It is compostable but not in the way that everybody understands it.”

Take three for the sea

Ocean Ambassadors Canada also released a call to action this week, suggesting three actions for its supporters to undertake in the next month:

1 – Pick up three pieces of garbage every time one visits a beach. Recycle what you can.

3 – Spend time at the beach. “Schedule time for bird watching, sitting quietly, making forts, digging holes in the sand, skipping rocks or exploring the intertidal zone. We’re pretty sure you won’t stop at  one trip and that you’ll be inspired to care for our ocean!”
See more about SPUD’s program on its website.

Article from The North Shore News.

Before COVID-19 forced the globe to social distance from a safe place, our world was…

Six months and a lifetime ago, retailers saw massive spikes in demand for online grocery…